The regulation of gene expression by nuclear receptors controls the phenotypic properties and diverse biologies of target cells. In breast cancer cells, estrogen receptor alpha (ERalpha) is a master regulator of transcriptional stimulation and repression, yet the mechanisms by which agonist-bound ERalpha elicits repression are poorly understood. We analyzed early estrogen-repressed genes and found that ERalpha is recruited to ERalpha binding sites of these genes, albeit more transiently and less efficiently than for estrogen-stimulated genes. Of multiple cofactors studied, only p300 was recruited to ERalpha binding sites of repressed genes, and its knockdown prevented estrogen-mediated gene repression. Because p300 is involved in transcription initiation, we tested whether ERalpha might be trying to stimulate transcription at repressed genes, with ultimately failure and a shift to a repressive program. We found that estrogen increases transcription in a rapid but transient manner at early estrogen-repressed genes but that this is followed by recruitment of the corepressor CtBP1, a p300-interacting partner that plays an essential role in the repressive process. Thus, at early estrogen-repressed genes, ERalpha initiates transient stimulation of transcription but fails to maintain the transcriptional process observed at estrogen-stimulated genes; rather, it uses p300 to recruit CtBP1-containing complexes, eliciting chromatin modifications that lead to transcriptional repression. PMID:19188451 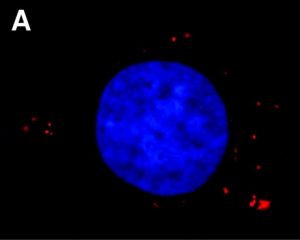