Due to declining estrogen levels during menopause, NAFLD prevalence is higher in postmenopausal women compared to in premenopausal women or in men. Postmenopausal women are more susceptible to weight gain, fat redistribution and dyslipidemia, all major hallmarks of metabolic syndrome associated with increased NAFLD risk. Gut microbiota plays important roles in development of gastrointestinal tract, metabolism and immunity. Host-microbe interactions allows regulation of a wide range of pathways that affect healthy and diseased physiology. Recent advances in – omics technologies, such as microbiome, transcriptome and metabolome analysis, provided evidence that estrogens and intestinal microbiota (IM) can collectively influence obesity, inflammatory disease, diabetes, and cancers. By understanding underlying mechanisms of estrogens and microbiota crosstalk, we might design dietary and pharmacological interventions to alleviate the metabolic syndrome and NAFLD. PMID:29100781

Estrogens have the potential to afford atheroprotection, to prevent excess adiposity and its metabolic complications including insulin resistance, and to lessen hepatic steatosis. Cellular responses to estrogens occur through gene regulation by nuclear estrogen receptors (ER), and through signal initiation by plasma membrane-associated ER. Leveraging the potentially favorable cardiometabolic actions of estrogens has been challenging because their reproductive tract and cancer-promoting effects adversely impact the risk-benefit ratio of the therapy. In prior works we discovered that an estrogen dendrimer conjugate (EDC) comprised of ethinyl-estradiol (E2) molecules linked to a poly(amido)amine dendrimer selectively activates non-nuclear ER, and in mice EDC does not invoke a uterotrophic response or support ER-positive breast cancer growth. In the present investigation, we employed EDC to determine how selective non-nuclear ER activation impacts atherosclerosis, adiposity, glucose homeostasis and hepatic steatosis in female mice. In contrast to E2, EDC did not blunt atherosclerosis in hypercholesterolemic apoE-/- mice. Also in contrast to E2, EDC did not prevent the increase in adiposity caused by western diet feeding in wild-type mice, and it did not affect western diet-induced glucose intolerance. However, E2 and EDC had comparable favorable effect on diet-induced hepatic steatosis, and this was related to downregulation of fatty acid and triglyceride synthesis genes in the liver. Predictably only E2 caused a uterotrophic response. Thus, although non-nuclear ER activation does not prevent atherosclerosis or diet-induced obesity or glucose intolerance, it may provide a potential new strategy to combat hepatic steatosis without impacting the female reproductive tract or increasing cancer risk. Link

Most breast cancer deaths occur in women with recurrent, ERα (+), metastatic tumors. There is a critical need for therapeutic approaches that include novel, targetable mechanism-based strategies by which ERα (+) tumors can be resensitized to endocrine therapies. The objective of this study was to validate a group of nuclear transport genes as potential biomarkers to predict risk of endocrine therapy failure, and to evaluate the inhibition of XPO1, one of these genes as a novel means to enhance the effectiveness of endocrine therapies. Using advanced statistical methods, we found that expression levels of several of nuclear transport genes including XPO1 were associated with poor survival and predicted recurrence of tamoxifen-treated breast tumors in human breast cancer gene expression data sets. In mechanistic studies we showed that the expression of XPO1 determined the cellular localization of the key signalling proteins and the response to tamoxifen. We demonstrated that combined targeting of XPO1 and ERα in several tamoxifen resistant cell lines and tumor xenografts with XPO1 inhibitor, Selinexor (SXR) and tamoxifen restored tamoxifen sensitivity and prevented recurrence in vivo. The nuclear transport pathways have not previously been implicated in the development of endocrine resistance, and given the need for better strategies for selecting patients to receive endocrine modulatory reagents and improving therapy response of relapsed ERα(+) tumors, our findings show great promise for uncovering the role these pathways play in reducing cancer recurrences. Link

Estrogens regulate function of reproductive and non-reproductive tissues in healthy and diseased states including breast cancer. They mainly work through estrogen receptor alpha (ERα) and/or estrogen receptor beta (ERβ). There are various ERα targeting agents that have been used for treatment of ER (+) breast tumors. The impact of direct nuclear activity of ER is very well characterized in ER (+) breast cancers and development and progression of endocrine resistance. Recent studies also suggested important roles for extranuclear-initiated ERα pathways, which would decrease the potency and efficiency of ERα targeting agents. In this mini-review, we will discuss the role of nuclear and extra-nuclear ER signaling and how they relate to therapy resistance in breast cancer. PMID:27394959

There is great medical need for estrogens with favorable pharmacological profiles that support desirable activities for menopausal women, such as metabolic and vascular protection, but that lack stimulatory activities on the breast and uterus. We report the development of structurally novel estrogens that preferentially activate a subset of estrogen receptor (ER) signaling pathways and result in favorable target tissue–selective activity. Through a process of structural alteration of estrogenic ligands that was designed to preserve their essential chemical and physical features but greatly reduced their binding affinity for ERs, we obtained “pathway preferential estrogens” (PaPEs), which interacted with ERs to activate the extranuclear-initiated signaling pathway preferentially over the nuclear-initiated pathway. PaPEs elicited a pattern of gene regulation and cellular and biological processes that did not stimulate reproductive and mammary tissues or breast cancer cells. However, in ovariectomized mice, PaPEs triggered beneficial responses both in metabolic tissues (adipose tissue and liver) that reduced body weight gain and fat accumulation and in the vasculature that accelerated repair of endothelial damage. This process of designed ligand structure alteration represents a novel approach to develop ligands that shift the balance in ER-mediated extranuclear and nuclear pathways to obtain tissue-selective, non-nuclear PaPEs, which may be beneficial for postmenopausal hormone replacement. The approach may also have broad applicability for other members of the nuclear hormone receptor superfamily. PMID: 27221711

With the advent of the -omics approaches our understanding of the chronic diseases like cancer and metabolic syndrome has improved.
However, effective mining of the information in the large-scale datasets that are obtained from gene expression microarrays, deep sequencing experiments or metabolic profiling is essential to uncover and then effectively target the critical regulators of diseased cell phenotypes. Estrogen Receptor α (ERα) is one of the master transcription factors regulating the gene programs that are important for estrogen responsive breast cancers. In order to understand to role of ERα signaling in breast cancer metabolism we utilized transcriptomic, cistromic and metabolomic data from MCF-7 cells treated with estradiol. In this report we described generation of samples for RNA-Seq, ChIP-Seq and metabolomics experiments and the integrative computational analysis of the obtained data. This approach is useful in delineating novel molecular mechanisms and gene regulatory circuits that are regulated by a particular transcription factor which impacts metabolism of normal or diseased cells.  Zhao, Y.C., Madak Erdogan, Z. Systems Biology of Metabolic Regulation by Estrogen Receptor Signaling in Breast Cancer. J. Vis. Exp. (109), e53832, doi:10.3791/53832 (2016).

Estrogens act through nuclear and extranuclear initiated pathways involving estrogen receptors (ERs) to regulate gene expression and activate protein kinases. We investigated the involvement of extracellular signal-regulated kinase2 (ERK2) and ERα in the activities of estradiol (E2), conjugated estrogens (CEs), selective estrogen receptor modulators (SERMs), and a Tissue-Selective Estrogen Complex (TSEC), a combination of a SERM and CE that has a blended activity. We found that CE and individual CE components were generally less effective than E2 in ERK2 recruitment to chromatin binding sites of E2-regulated genes. Likewise, CE was much less agonistic than E2 in stimulation of proliferation of ERα-positive breast cancer cells. The SERM bazedoxifene (BZA) fully suppressed proliferation stimulated by E2 or CE and reversed gene stimulation by CE or E2, as did the antiestrogen Faslodex. Thus, the balance of biological activities mediated through nuclear ERα vs. ERK2-mediated activities is different for CE vs. E2, with CE showing lower stimulation of kinase activity. Furthermore, at the BZA to CE concentrations in TSEC, BZA antagonized CE stimulation of gene expression and proliferation programs in ERα-positive breast cancer cells. The studies provide molecular underpinnings of the different ways in which SERMs and estrogens support or antagonize one another in regulating the chromatin binding of ERα and ERK2, and modulating gene and cell activities. They illuminate how the combined actions of two classes of ER ligands (SERM and CE, present in TSEC) can achieve unique modes of regulation and efficacy. link 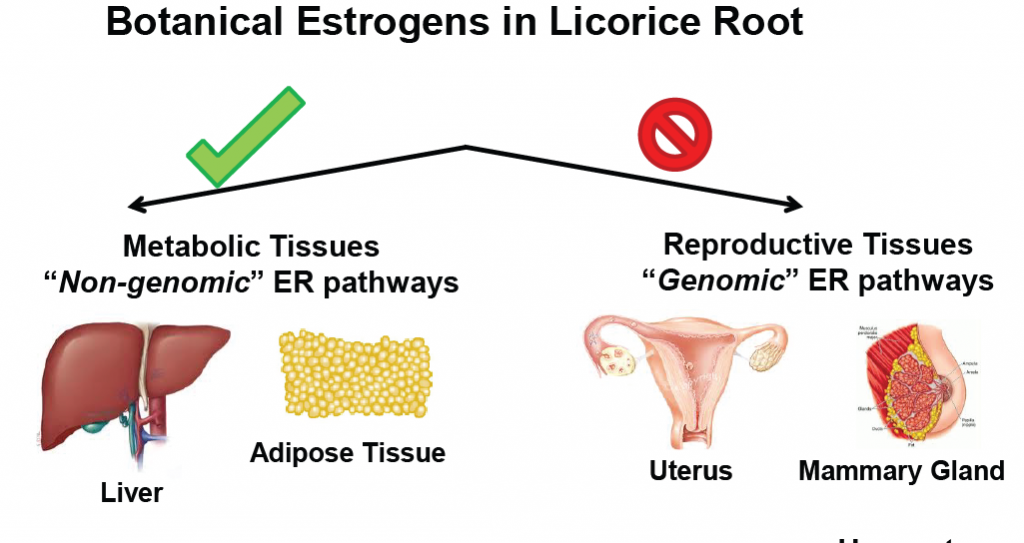 Cancer cell motility and invasiveness are fundamental characteristics of the malignant phenotype and are regulated through diverse signaling networks involving kinases and transcription factors. This study establishes an estrogen receptor (ERα)/MAPK (ERK5)/cofilin (CFL1) network that specifies the degree of breast cancer cell aggressiveness through coupling of actin reorganization and hormone receptor–mediated transcription. Using dominant negative and constitutively active forms, as well as small-molecule inhibitors of extracellular signal–regulated kinase (ERK)5 and MAP–ERK kinase (MEK)5, it was revealed that hormone activation of ERα determined the subcellular localization of ERK5, which functions as a coregulator of ERα-dependent gene transcription. Notably, ERK5 acted in concert with the actin remodeling protein, CFL1, and upon hormone exposure, both localized to active nuclear transcriptional hubs as verified by immunofluorescence and proximity ligation assays. Both ERK5 and CFL1 facilitated PAF1 recruitment to the RNA Pol II complex and both were required for regulation of gene transcription. In contrast, in cells lacking ERα, ERK5 and CFL1 localized to cytoplasmic membrane regions of high actin remodeling, promoting cell motility and invasion, thereby revealing a mechanism likely contributing to the generally poorer prognosis of patients with ERα-negative breast cancer. Thus, this study uncovers the dynamic interplay of nuclear receptor–mediated transcription and actin reorganization in phenotypes of breast cancer aggressiveness.PMID: 24505128

Estrogen receptor α (ERα) is present in about 70 % of human breast cancers and, working in conjunction with extracellular signal-regulated kinase 2 (ERK2), this nuclear hormone receptor regulates the expression of many protein-encoding genes. Given the crucial roles of miRNAs in cancer biology, we investigated the regulation of miRNAs by estradiol (E2) through ERα and ERK2, and their impact on target gene expression and phenotypic properties of breast cancer cells. We identified miRNA-encoding genes harboring overlapping ERα and ERK chromatin binding sites in ERα-positive MCF-7 cells and showed ERα and ERK2 to bind to these sites and to be required for transcriptional induction of these miRNAs by E2. Hsa-miR-196a2*, the most highly estrogen up-regulated miRNA, markedly down-regulated tumor protein p63 (TP63), a member of the p53 family. In ERα-positive and ERα-negative breast cancer cells, proliferative and invasiveness properties were suppressed by hsa-miR-196a2* expression and enhanced by hsa-miR-196a2* antagonism or TP63 target protector oligonucleotides. Hsa-miR-196a2* and TP63 were inversely correlated in breast cancer cell lines and in a large cohort of human breast tumors, implying clinical relevance. The findings reveal a tumor suppressive role of hsa-miR-196a2* through regulation of TP63 by ERα and/or ERK2 signaling. Manipulating the hsa-miR-196a2*-TP63 axis might provide a potential tumor-suppressive strategy to alleviate the aggressive behavior and poor prognosis of some ERα-positive as well as many ERα-negative breast cancers. PMID: 23250869